The Benefits of Being Outdoors

Since the 22nd May (seven weeks ago) we have been tracking absentee days due to common cold’s, flu’s, viruses and any other winter related illnesses at our childcare centre.

Here are some extremely interesting statistics that we have gathered to date:

This means that over the course of the last seven weeks less than ½% of our children have been absent due to the common cold, flu’s, viruses and other winter related illnesses.

We firmly believe that this statistic is as a direct result of the children being outdoors more often, where they are able to breathe fresh air instead of being stuck inside warm rooms with dry air that act as an incubator that can allow the flu, virus and common colds to be easily spread among the children.

During the last seven weeks, we have been increasingly spending more time outdoors.  We have had a lot of positive feedback and also some questions from our families, so we wanted to provide you with some further information about the children being outdoors, which has already provided them with so many positive experiences and learning outcomes.

Being outdoors more often continues to evolve as we gradually introduce and trial all manner of valuable experiences both physical and sedentary under the ever-watchful eye of our highly trained team of professionals.

Experiences such as our Extra-curricular program, planned and unplanned activities, unstructured play and for the older children (not babies) eating and sleeping.

Our team of professionals, of whom over 90% are a minimum Diploma Qualified have a staggering combined total of 118 years’ experience in the childcare profession.

Every second of every day our team of highly trained professionals are using their professional judgment and experience to dynamically assess nature and the children both of which can be at times, unpredictable.

There is nothing that we do indoors that they can’t be done outdoors but the benefits for doing it outdoors far outweigh any perceived benefits of doing it indoors.

It should be noted that under no circumstances do we force the children to go outdoors, nor do we force them to stay outdoors, they have a voice and a choice at ALL times, they can and do say NO!

We have also been tracking any changes that we have noticed in the health and well-being of the children (both physical and emotional) as a result of being outdoors more often.

Please see below a small selection of observations made by our team of professionals over the last seven weeks about the numerous changes that they have noticed since the children have been spending more time outdoors:

‘Since they started being outdoors more the children have become more physically active. They engage in a lot of running activities which supports their gross motor skills. ‘

‘When eating lunch outside on the picnic tables the children engaged in many more group conversations rather than one on one. As they all sit at the same table, interactions are shared around the table and everyone contributes.’

‘Since they started spending more time outdoors, the children have engaged in a variety of imaginative play. From being monsters, to mothers and fathers to bug hunters.’

‘I have noticed since we have been spending more time outdoors that the general behaviour of the children has improved and there has been less squabbling amongst the older children.   They are in general resting better and for longer and they are more focused on activities and the experiences provided and seem to work together on projects better.’

‘The changes I have noticed from the babies being outside more:

‘Since they started playing outdoors more they have shown
respect to the natural environment, caring for the plants
and animals.’

‘Since the older children started sleeping outside more they have slept easily.’

‘Since they started being outside more they have been playing
with friends (developing social  skills) running together and, doing a range of activities together.’

‘I have noticed the children have become more resilient through being outdoors and their spatial awareness and cooperation has improved.’

‘The younger children are developing more quickly as the older children help, assist and teach them new things as they are often integrated throughout the day.’

‘When we don’t eat or sleep outside, the older children are regularly asking us why not? So, we explain to them the reasons why it is not always possible to eat, sleep or be outdoors.’

Currently there in Perth, the UV is less than 3 which requires no sun protection however we have over 70 blankets, plus plenty of rugs, mattresses, sheets, cushions and we use the shelter under our gorgeous trees or create massive tents using the tarpaulins as additional shelter. The children love this as they think of it as a camping trip. We also make them wear their bucket hats regardless of the UV and we do apply sunscreen (if necessary) even though they are shaded and under shelter.

Again, it is important to note that under no circumstances do we force the children to sleep outdoors, nor do we force them to stay outdoors, they have a voice and a choice at ALL times and they do say NO! Which is fine and we stay inside.

But when they do sleep outside the sleep longer, better and when they wake up they are significantly more refreshed and rested than when they have slept inside.

Again, please note that all of this is done under the watchful eyes of our trained professionals who are constantly and dynamically assessing the children and nature on a minute by minute basis.

I acknowledge that seven weeks is a comparatively short time especially given that we have had a late/mild winter here in Perth but I thought it important that we share these observations with you.

Please know that the immediate and long-term safety, health and well-being of all children (both physical and emotional) that attend our Centre is constantly at the forefront of our collaborative professional minds and that we would never do anything to jeopardise the precious children that you have entrusted us as professionals to look after.

As always, we value any thoughts, comments, feedback or suggestions that you may have.

The Benefits of Sleeping Outdoors 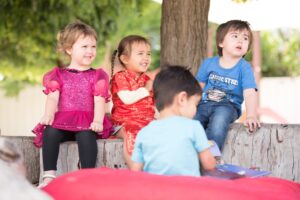 Dear Families & Friends of Little Learners, It gives me great pleasure to announce that today the finalists where announced in this year’s Australian Family Early Education and Care Awards. Of the 1,730 National nominees 100 finalists have been selected. …